Strategy for a Cyclist-Friendly Community

Building a cyclist friendly community requires a combination of social and physical structures. Like a  pyramid, these structures must be built upon a solid foundation, or they will collapse.

When the foundation is strong and the layers of the pyramid reinforce each other, they will support a healthy, thriving bicycle culture.

Bicycles are Vehicles/Cyclists are Drivers

This is the foundation upon which a healthy bike culture must be built. It supports all other advocacy efforts, and the lack of it undermines them. Likewise, advocacy efforts must support this foundation, not erode it.

It begins with the law—not just the legal definition of bicycles as vehicles, but legal equity and access to the roadway. Laws which restrict cyclists’ use of a travel lane (Far Right and Mandatory Bike Lane/Shoulder/Sidepath laws) must be eliminated. Even with exceptions, these laws carry discriminatory weight and are most often misinterpreted to the detriment of cyclists.

Institutional bias also extends to transportation engineers and the standards set for bicycle facilities. Current minimum standards for bike lanes (and even sharrow placement) are harmful to people on bicycles. Coupled with mandatory use laws and social pressure from motorists, they restrict—rather than facilitate—access to the roadway. Current institutional research is equally destructive, concentrating on the “feelings” of novice bicyclists often at the expense of both the operational characteristics of bicycles and the needs of competent bicycle drivers.

Correcting institutional bias is the basis for changing the cultural norms — bicycles must be a normal, accepted, respected part of the transportation system (vehicles, not toys). This bias must be corrected with education of law enforcement, planners, engineers and policy-makers.

When our culture treats bicycles as vehicles, the average person will think of himself as a driver when on a bicycle, thus be more inclined to obey the rules of the road, seek education and act assertively as an equal user.

NOTE: “Respect” is treating bicyclists as equal drivers with the same rights and responsibilities as other drivers. Bicyclists are neither inferior nor superior to other road users. 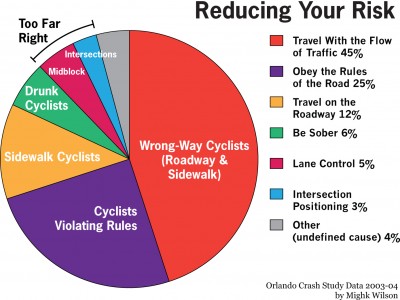 The majority of reported bicycle-related injuries are the result of collisions with fixed objects, other bicycles, pedestrians or falls due to loss of control. Teaching people simple bike handling skills and increasing their confidence with the vehicle will greatly reduce these accident rates.

The majority of bike vs motor vehicle crashes are a result of bad choices by cyclists (running stop signs/lights, riding against traffic, on sidewalk, in the dark without lights, hugging the edge of the road, etc.). The crash data indicate that regardless of other safety issues in the traffic environment, uneducated cyclists are too often the cause of their own problems.

Law enforcement for dangerous practices like wrong-way riding, riding without lights at night and violating right-of-way should be part of the education process. Poor cyclist behavior feeds the belief that cyclists don’t belong on the roads and fuels animosity toward cyclists. Crash reports feed the incorrect belief that cycling is dangerous and cyclists are vulnerable victims. Fear feeds the behaviors that increase crash risks.
The cycle can only be broken by education. Education will only be widely accepted if:

When the public is made to understand how easy it is for bicycle drivers to control their safety and interactions with other road users, we will improve both cycling safety and the attractiveness of cycling.

There are 3 traffic-culture forces at play for bicycle advocacy:

Fear of hostility causes bicyclists to operate in ways that are inimical to their safety. Riding on the sidewalk or squeezing into the gutter to avoid the wrath of motorists contributes to both (solo-fall and bike-v-car) crash types listed in the previous section.

Bicycling is relatively safe, educated bicycle driving is even safer, but our traffic culture itself is not a paragon of safety. The evening news gives us constant, if not disproportionate, reminders. Unsafe behavior is on display continually, even as most of us elude the consequences.

Improving safety requires changing the way people behave and view their responsibilities as drivers. We need more traffic enforcement, better traffic justice and a greater sense of citizenship and civility. We also need more exposure to laws regarding bicyclists and pedestrians in the driver education and licensing process.

Improving the traffic culture will have a positive effect on everyone in the community, not just bicyclists.

Facilities for bicyclists: When behavioral problems affecting safety are addressed, and when the institutional bias against bicycle driving is replaced with respectful understanding of bicycle drivers’ needs, infrastructure can be targeted to solve practical issues of connectivity and access. Intelligent infrastructure solutions are less expensive and less likely to have unintended consequences than facilities that are built in an attempt to bypass education or solve social problems.

Land Use Policy and Transit: Better vision for land use really should be a foundational element, but for most of our cities, that ship has sailed—at least for the time being. However, as our growth has stalled, now is a good time to at least look at policies which would promote bicycle permeability through new suburban development.

Another global asset to cycling is a complete, integrated transit system. When bicycle transportation is added to bus and rail, they complement each other. Public transit extends the range of the bicycle. The bicycle increases the service area of public transit. A functional public transportation system also makes it easier to keep dangerous drivers off the road.

There are opportunities for alternative transportation funding developing at the federal level. Most bike advocates are pushing for money to build facilities without addressing the critical social and education aspects of a healthy bike culture. We need to encourage advocates, community leaders and policy-makers to think bigger and focus on core issues.

I found it interesting that LAB chose a speaker from Copenhagen as the keynote for the Bike Summit. It’s easy to get distracted by the cycletracks, but something more fundamental caught my attention. Danes who ride bikes for transportation don’t think of themselves as “cyclists” or “bike commuters”… in the same way Americans who drive cars to work don’t think of themselves as “motorists” or “car commuters.” Directly related to that, Danes can expect the same level of engineering and concern for efficiency, safety and connectivity on their bike facilities as we do on our roads. Bicyclists are also welcome and respected on all roads outside the network of bikeways.

Infrastructure did not create that. Respect for the bicycle as a mode of transportation existed first. We aren’t even there yet.

How do we get there?